ORIGINS OF MY RACISM

The new year begins with old thoughts provoked by one of Paul's letters in the New Testament. I quote from notes I made in the late 1990's while thinking about my brother John, his homosexuality, and my own homophobia:

For there are many unruly and vain talkers and deceivers, specially they of the circumcision: Whose mouths must be stopped, who subvert whole houses, teaching things which they ought not, for filthy lucre’s sake. . . . Wherefore rebuke them sharply, that they may be sound in the faith; Not giving heed to Jewish fables, and commandments of men, that turn from the truth.

Following Paul's lead, conditioned by his biases and the prejudices of a Christian nation, our parents helped pass along, or allowed to be passed along, part and parcel with their conservative stability, a subtle racism. I had to confront this again a few weeks ago, waiting at a streetlight. Around the corner came a car with a black male driver and a white female passenger sitting intimately close to him. My stomach turned.
A bowl of nuts for the holiday season: hazelnuts, peanuts, walnuts, pistachios, pecans, and nigger toes. That’s what I grew up calling them.
Standing next to the east goal post of the football field at Hermosa Jr. High, a fellow seventh-grader gleefully and perhaps maliciously informed me there were creatures in the world called “homaphrodites.” Incredulous, yet believing, I instinctively acted to brace up my crumbling world, erecting the first, but not last, phobic pillars to protect me from those hitherto unknown, still faceless, but now named “homos.”
Dad taught science and math at the junior-high school before he became principal. As a science teacher he had access to mercury and to our delight he brought home plastic vials of it. We split it into quivering masses with our fingers and raced heavy blobs down inclines. Dimes, when rubbed with mercury, glistened like new silver.
BOCA RATON, Fla. (AP) --
Drips and drabs of silvery mercury led officials to about 3 pounds of mercury sitting in a dorm room at Florida Atlantic University, forcing the evacuation of 187 students. The toxic metallic element, which attacks the lungs and central nervous system, was in a bottle labeled “mercury” with a hand-drawn skull and crossbones.
Families can be toxic with the best of intentions. A threatening letter written during an election in which another Romney was running for President of the United States gives ample context for my own family's religiously based racism (see inserts). 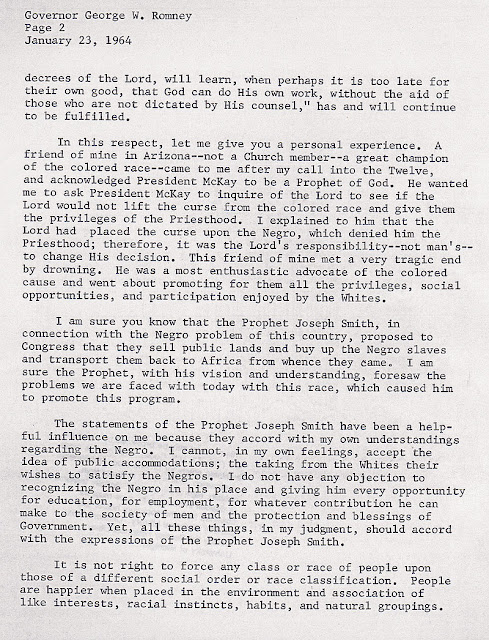 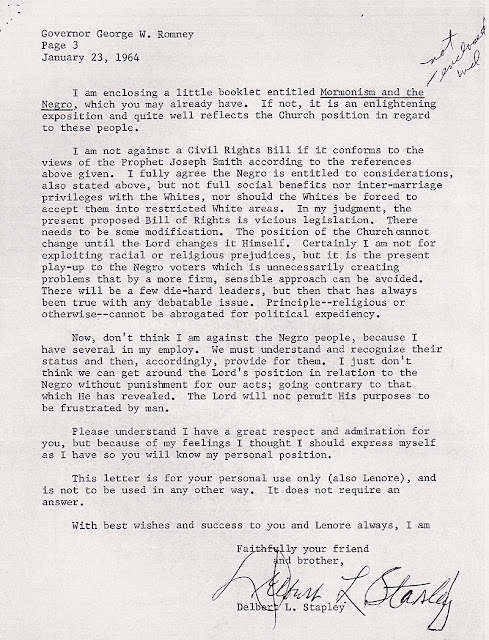 Not long after Stapley warned George Romney not to mess with the racial order set up by God, these notes from an experience at BYU, 1968:
A cold night. January or February. I stand with friends outside Brigham Young University’s “Smith Family Living Center.” Students are dancing inside the plate-glass windows. A young black man approaches, looks into the building, moves on.
I know him, someone claims. He’s LDS. Must be lonely. Can’t hold the priesthood. Can’t marry in the temple. Seed of Cain. Curse of Ham.
We enter the Family Living Center, join the dancers. His testimony of the true gospel, I think, commits him to a difficult life now; but in the eternities. . . . My mind skids to the warm, firm thighs of the tall girl from Idaho who is holding me as close as I her.

And another set of notes:
Rodney Barker’s book, The Broken Circle, about the murders and civil unrest in my home town, Farmington, New Mexico, takes me back to additional origins of my racism. Most surprising is a 1975 Civil Rights Commission assessment of the events following the torture and murder of several Navajo men by boys in my high school.
There were large demonstrations against anglo insensitivity to the case, a case that resulted in the killers being sent to reform school till they turned eighteen.
The Mayor of Farmington in 1974, just a few months in office when the marches began, was also the LDS Stake President. He was a family friend. He did what he could to manage the situation. He held meetings with the protestors. He tried to explain that the three boys didn’t represent the rest of Farmington’s Anglo population. Their abbreviated sentences to juvenal reform school were not evidence of racism, but products of technicalities of the law.
The Mayor could not understand why the Navajos were so riled up. To understand, he would have had to oppose the society he represented, the culture that had made him. That made me.
When “The Farmington Report” finally appeared, concluding that investigators had found ample evidence of racism, discrimination, and brutality against Navajos, Mayor Webb’s frustration was manifest:
This is a typical example of how the ever-growing cancer of bureaucracy is dominating and directing our country and the lives of its citizens. . . . This commission would appear to want to drag each of us down to the level of the lowest common denominator and obviously is advancing the cause of socialism in this country. They advocate that government fill all of the needs of the individual rather than achievement through individual effort. This would be impossible to finance and completely contrary to the American way of life, and the greatness achieved through the free enterprise system and self-achievement of the individual.

Sterling Black, chairman of the Advisory Committee, responded with frustrations of his own:
There appears to be little awareness on the part of the general population or elected public officials of the complex social and economic problems. . . . Navajos are aware of the indignities and injustices, and want something done to better the situation. . . . [Unfortunately, they hear only that] there are no problems existing, people in this town get along very well with each other, there are no indignities, there are no injustices, and there is nothing to be done to remedy these complaints.


Some Final Thoughts:
My years in high school and at BYU during the sixties and early seventies were sheltered years flavored by an unrelenting political conservatism. In that world, the civil rights movement was a Communist front. William Dibble, a decent Mormon painter, began to dabble in abstraction sometime about mid-century. The Dean of Fine Arts at BYU thought it prudent to warn him: Bill, you are flirting with apostasy and are on the brink of Communism.

this subject touches,,,,,,no more like rubs a strawberry on my emotional ass....I left home in 1965...in part, due to my fathers natural(ly learned) use of the "n" word when referring to black people...the word sickens me and always will...I love my dad...he loved and supported me and our family with fatherly kindness, integrity, and great religious faith...catholicism-sand ground in my spiritual digestive tract for many years...probably still does...

This sort of societal-religious bigotry still lives in our midst...

The word I find most demonstrates society's ongoing bigotry is "tolerance"...This word is used by religious believers as way to justify quiet bigoted attitudes...Tolerance says "oh..well..ok...(heavy exhale) even though you are different than me, I will allow you into my space with your...contrary ideas...NOT-white skin...any other of your beliefs different from mine I judge not-"Truth"...

I would like to believe prejudicial attitudes are fading ... but the occupy wall street movement has demonstrated that mainstream society continues to hang onto old fear-stimulated beliefs that...."If there was a better idea for YOUR life.....I would have it."

well said, Michael. i wonder how my own children will look back at my parenting and wish things had been different.

jsut reread this post....I'm consistently reminded that in accepted utah mormon culture....the basic life premise for determining whether a thought is productive of not is quite simply...."I thought (it) so it must be true.." (commonly referred to as personal revelation)

Thing most interesting to me...for the last 9 years I have rented rooms in my house...well over 90% of the people I have rented to have been mormon alcoholics and drug addicts ..for being the self-proclaimed savior of the traditional family....mormons are failing miserably.....

I'm not suggesting I am surprised at my experience with troubled mormons...I am suggesting that mormon culture is seriously failing in their fear based, self-imposed maniacal effort to live their basic missionary needy effort to convert the world....the basic personal missionary mantra seems to be....."lets see now...If I can convince (scott) that what I believe is true....OH WOW!!! MAYBE IT IS!!!

Hearing/reading these sorts of posts and comments always makes me sad that some look at me (as a believing Mormon) and think I'm misled and ignorant and "tolerant" at best. I was not forced to believe anything I was taught at home or at church. I was taught to always find out for myself -- this is actually Mormon doctrine, not just my kind family's approach, as some may argue otherwise. The toxic aspects pointed out in this post and comments are indeed toxic, but they are unfairly reported as being LDS teachings. Racism and homophobia (and any other toxicity) associated with church issues are products of misunderstandings on factual and spiritual levels.

It feels demeaning to be categorized. I'm unfortunately finding that being religious is so not cool in the academic and artistic worlds I've brushed into through the years. It stinks, and it's so pathetically cliche. I went to a very "liberal" school where it was ok to be anything and everything but Christian, let alone Mormon. It's like, if you want to have credibility, ditch the Mormon identity because otherwise you're just a blind believer whose every opinion stems back to your Mormon brainwashing. Hopefully my generation can disprove this and gain credibility.

Rachel, as you may have noted, I didn't say anything about current teachings and beliefs. I'm simply trying to figure out why I have, still, despite my own wishes and strongly held beliefs, whiffs of racism that float up from my subconscious.
There were, when I was growing up, when I was at BYU, teachings and beliefs related especially to black people and to their unworthiness in the pre-existence, exactly the kind of things Delbert Stapley is playing off in his personal letter.
You're lucky you grew up after 1978, in a church no longer as blatantly racist. Still, the church's current teachings about gays seem to me to fit a very similar pattern. With some luck and as time passes, those are likely to be replaced by a more tolerant attitude as well.

I do have confidence that things work themselves out correctly as we learn to navigate between earthly and spiritual worlds and ideas. It just takes time sometimes and we need to be patient with each other in the meantime.