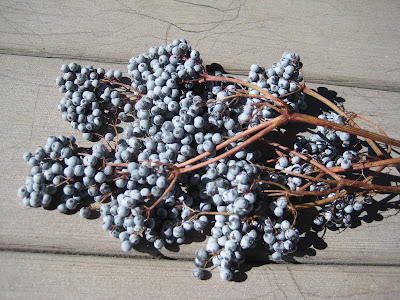 A couple of years ago (five years? ten? time flies!), when Sam Rushforth and I were riding the Great Western Trail every day and writing about the rides for Catalyst Magazine, we watched a bush of elderberrys grow ripe next to the trail just inside Provo Canyon. The day we were planning to pick them they disappeared -- food for a ground squirrel that had been watching them even more carefully than we.
We were interested because the year before we had brought a load of them down to the city in our shirtfronts and with the LDS food-storage honey Sam and Nancy had been hording for decades, brewed a savory mead, the bitter elderberries a perfect match for the sweet honey.
This morning, Blue and I came down off the mountain where we had been hiking and ran across more elderberries, and I brought them home to eat with yogurt and with fond memories.
Posted by Scott Abbott at 7:29 PM 1 comment:

Early in our class on "Language, most dangerous of possessions" (Hölderlin), we read Rousseau and Herder, two eighteenth-century writers who were disgusted with what they saw as the arbitrary and abstracted conventions of French and German civilization. One of their contentions was that civilized and civilizing language develops in its citizens increasing distance from the body.
Writing in the early twentieth century, the German poet Rilke said that he wanted to read the entire historical dictionary started a century earlier by the Grimm brothers (of fairy tale fame). That would take him back to the origins of words, to the "word kernels," to the metaphorical roots that are lost with time and use.
There are advantages to abstraction, I guess, to shifting meanings and new contexts, to abstract thinking.
But every time I want to understand an idea better, I turn first to the underlying metaphors, reach for the Grimm's dictionary or to the OED, and more often than I would have ever thought possible, the root of an important word comes from our sense for ourselves as upright, standing beings. For years I've been trying to sort out this one root, and here's a bit of what I've come up with:

It is at least as old as the Sphinx’s riddle:

What being, with only one voice, has sometimes two feet, sometimes three, sometimes four, and is weakest when it has the most?

Man, Oedipus answered, because he crawls on all fours as an infant, stands firmly on his two feet in his youth, and leans upon a staff in his old age. [Robert Graves, The Greek Myths: 2 (Middlesex: Penguin Books, 1955) 10.]

We call ourselves wise (homo sapiens) and argue that our language differentiates us from other species of animals. But even more substantially, we define ourselves by our ancestors’ revolutionary achievement of a standing posture (homo erectus). We became human, in one sense, because we stood up. In another sense, we are who we are because of what that physical act has been made to stand for. Reflecting the substantial nature of that original erection, our languages and cultures constantly, insistently, even obstinately establish superstitions and understandings related to the constituative circumstances of our existence by systematic reference to our station and stature as standing beings, as static and ecstatic beings whose destiny is to cause things to stand. As these words based on the *stā root illustrate, metaphors of standing determine our conceptions of time and space; they shape our understanding of existence and ecstacy; they are the tools and the subject of philosophy and painting, poetry and fiction, sculpture and law, history and psychology, anthropology and linguistics, archaelogy and teleology.  Wherever, in short, humans have payed scientific or artistic attention to our status as human beings, we have done so through metaphors of standing.

And what is reflected and/or established in language is equally the case visually. Take this ancient Greek statue of a powerfully standing woman/goddess, her erect strength heightened by wings: 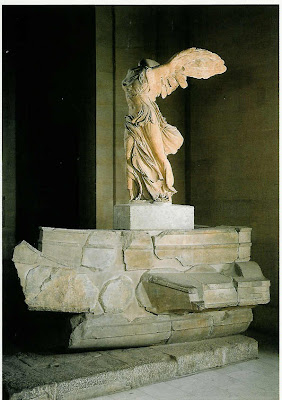 Or think about depictions of the crucifixion of Christ, which emphasize the destruction of his ability to stand (and about pictures of the resurrection, which show him upright again, no longer tied to the earth; the German word for resurrection, "Auferstehung," means "standing up again).

Or smile at Niki de St. Phalle's sculpture, with it's evocation of paradoxical lightness. 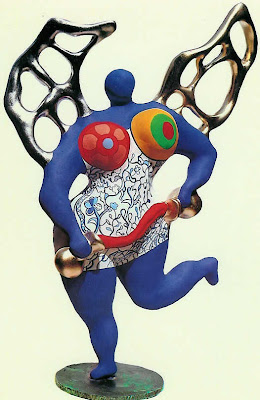 Homo erectus, indeed. In fact and metaphorically. Imagine our vocabulary if we were four-legged beings.
Posted by Scott Abbott at 5:25 PM 2 comments: