Dreamland, A Collaboration between an Author, an Artist, and a Book Designer

This week, the odometer in my car approached and then passed 100,000. As it did so, as numbers lined up in striking patterns, there were several almost magical moments for me:

Why magical? Because of the shapes, I think. Because out of the visually unremarkable sequences that lead to 097392 or earlier to 079124, suddenly there are repetitions of such order and weight that they seem noteworthy.

Perhaps they even seem meaningful.

Not, of course, when I ponder what they mean: they don't mean anything. They won't reveal the philosopher's stone. They won't help me with my cooking. They don't tell me anything more than do the numbers 100152 or 098563, which are both indications of how many miles the car has put behind it since I drove it off the lot.

But they seem, they feel profound, profoundly different from the less well ordered numbers.

Slot machines have a similar fascination for me, doubled up by the fact that when the three red sevens appear in a row along the line the machine makes sounds and flashes and quarters or nickels come cascading out of the machine.

Along with casino owners who take advantage of my need for shapely sets of numbers, poets, novelists, and musicians all capture my imagination with orderly and repetitive sequences.

David Mitchell, for instance, whose novel Cloud Atlas I'm currently reading, has my attention immediately when I realize that the first and last chapters of the novel, "The Pacific Journal of Adam Ewing," are the historically earliest of the accounts. Just inside those chapters nestle two more recent chapters called "Letters from Zedelghem," inside of which are two even more recent chapters titled "Half-Lives," inside of which are the science-fiction twin "Orisons of Sonmi-451" which cradle the single chapter "Sloosha's Crossin' an' Ev'rythin' After."

It's a splendid novel so far; and the pleasures I'm getting from reading are heightened by the form. Does the form have meaning outside the story or only in the story? It seems laden with meaning in either case, at least for me. 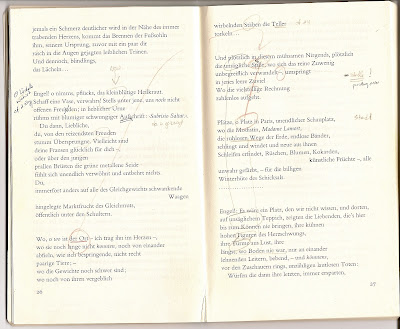 What kind of meaning?

What if the poet or artist is giving me nothing more than the odometer offers, but is hiding that fact behind my assumption that there is content in the form?

I published an article a few years ago that focused on the metaphor of standing in Rilke's "Duino Elegies." You can read the whole thing HERE, if you're so inclined. What fascinated me was the fact that the "Elegies" are about the making of art, about the satisfying but oh so fleeting standing towers acrobats make of their own bodies, about the establishment of meaning, however constructed and arbitrary, through the tracing and naming of constellations of stars, about the creation of stanzas. Here a couple of paragraphs from that article, along with the center pages of the "Elegies" with my markings and workings:

In the tenth stanza of the Fifth Elegy, we find a most remarkable point of transition:
Und ploetzlich in diesem muehsamen Nirgends, ploetzlich
die unsaegliche Stelle, wo sich das reine Zuwenig
unbegreiflich verwandelt- , umspringt
in jenes leere Zuviel.
Wo die vielstellige Rechnung
zahlenlos aufgeht. (V: 81-86)
(And suddenly in this arduous nowhere, suddenly
the unsayable [standing] place, where the pure too little
unfathomably transforms-, jumps over
into that empty too much.
Where the many digited account
dissolves into numberlessness.)
The Stelle between the two states serves as a locus of being, and the stanza has an interesting place in both a broad structure and a specific context. It is no accident that the still point of transition between "the pure too little" and "that empty too much" is "the unsayable [standing] place/Stelle," for as seen above, related "sta- words act in precisely this transitional sense. The poet states that the Stelle is ineffable ("unsaeglich"), and then does everything in his power to depict it, to create it, to say it. In his poetry he creates figures. And in this language "beyond" language, in "this arduous nowhere," the "unsayable [standing] place" suddenly appears out of "the pure too little," disappearing just as suddenly into "that empty too much." The word "Stelle" not only describes a place, but in describing, is that place. Being is achieved as the  word is written. And once written, it must fade. For a moment however, a structural device intensifies the Stelle created in these six lines. 423 lines precede the tenth stanza and 423 lines follow, leaving this six-line stanza which describes a moment and a place of sudden, unfathomable transformation as the exact center of the combined ten Elegies. The dash near the center of this central stanza is "the unsayable [standing] place," the very point of transition between "das reine Zuwenig" and "jenes leere Zuviel." The dash (itself a sign of ineffability) is a balance point, and the tenth stanza is the point around which the other 846 lines balance.
Okay, that's enough of the article.
Who but a odometer and slot-machine worshiper would have counted 846 lines and found the dash at the center of the center?
And what does it mean that Rilke worked so hard to surround that transitional and most arduously achieved centerpiece of creation with equal numbers of lines?
It means, I think, that the meaning we create as artists and poets and philosophers is fundamentally formal. And as profound as the meaning may be, the profundity is at best that ephemeral construction between too little and too much.
It is, precisely that "ultrathin" place/moment between 099999 and 100000.
Posted by Scott Abbott at 8:14 PM 1 comment: